A Turtle and a Chipmunk 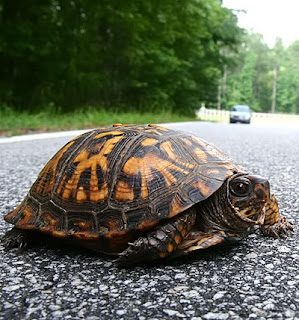 I rescued a turtle this morning as I was driving out of our neighborhood. I stopped the car, picked him up from the road and put him on the grass on the other side. Part of his shell had already been damaged, so it was a good thing that he was spotted by a decent person like myself who stops to help turtles. I got back in my car with a warmed heart. Then, less than ten seconds later, as I was still congratulating myself on my benevolent nature, I ran over a tiny chipmunk.

My heroism lasted literally less than ten seconds. The little guy darted in front of my Kia, doubled back, and went under the wheel. The only thing I could do was look back in my rear view mirror to confirm that he was goner.

What did this all mean? I stopped to rescue one animal and because of that I end up getting another one killed. Was there a deep lesson to be learned here? Could I use this story in a sermon to illustrate some profound truth? I thought, probably not. The only point from all of this is that animals should be more careful on the road.

Published in Stay on Target
More in this category: « Well, this is done.
back to top
Be sure to go here and like our Facebook page